skip to main | skip to sidebar

How Catherine the Great Got That Way 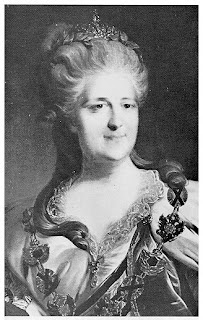 A bad girl isn’t born, she’s made. We’ve seen it over the course of Western history: a bright and pretty yet relatively unremarkable young woman finds herself stuck in an awful situation—she may come from a crazy family or crushing poverty, or perhaps she’s locked in a disastrous marriage—and she reaches a crisis point that drives her to find an exit. As she journeys alone into the world, she discovers that the things good girls are taught to shun, meaning illicit sex, dirty money and self-serving power, are the same things that will save her.

This discovery marks the moment of her becoming a bad girl.

Catherine the Great, Empress of All the Russias, is a classic example. Until the age of fifteen, she was a sweet-natured princess from a tiny German state who spent her time going to church, learning French and entertaining youthful fantasies of love and marriage. But all that changed when Her Majesty the Empress of Russia decided that the girl was the perfect match for her first cousin, the future czar.

Married to a Mental Defective
As a result, the princess found herself lost in a far-off land and married to a mentally defective degenerate who refused to consummate their union. On their wedding night in August of 1745, the Empress Elizabeth herself led the virgin bride to the couple’s bedchamber, a pink velvet fantasyland, where servants dressed her in satin and lace and tucked her into bed. The girl waited for her new husband, and she waited, and then she waited some more.

“My dear husband did not attend to me at all,” Catherine recalled later in her memoirs. “I yawned, I suffered from boredom, having nobody with whom I could exchange a word.”

In the wee hours of the morning, Peter stumbled into the room, drunk, and collapsed on the bed with his boots on. There was no sex that night, not a tender word or a kiss, and that’s the way things went for years—Catherine would wait for Peter, and Peter would come home drunk and either collapse or train his dog in the bedroom while tormenting Catherine with talk of sexual exploits with his mistresses. After years of fruitlessly waiting for her husband to impregnate her and thus ensure an heir to the throne, Catherine took matters into her own hands and went out and found herself a lover to provide what her husband wouldn’t.

Catherine’s mother-in-law got her heir, never mind who the child’s father might be, and with this item of business finally tended to, the super-fertile Catherine enjoyed many pregnancies by many lovers. It became her custom to deposit her babies in the nursery so she could quickly return to court and keep up with the political intrigue going on at the palace in Saint Petersburg. “Heaven alone knows how it is that my wife becomes pregnant,” Peter complained to his friends after one such pregnancy. “I have no idea whether this child is mine and whether I ought to recognize it as such.”

A Good Time for Murder
Eventually, Catherine grew tired of Peter—as did Russia’s citizenry and armed forces—and she decided along with Gregory Orlov, her lover of the moment, that it would be best if she dethroned her husband, which explains why Czar Peter III was murdered in 1762. Certainly, Peter’s murder freed the Empress to live out her passions. Once he was gone, she lost any sense of shame and stretched into her true self. She discovered her talents, developed a powerful presence among her courtiers and surrounded herself with admirers.

In short, Catherine the Great was a bad girl:
• She had encountered an obstacle that forever changed the direction of her life.
• She took action to ensure that she would never feel trapped again.
• She rebelled against the established order.
• She enjoyed sex and love immensely and used men to get what she wanted.
• She found an outlet for her creative energy, which in her case involved the assumption of wealth and power.
• She defied her critics and became a star.

Catherine led a very complicated life, but she never saw it that way. By her thinking, she was merely a simple girl who needed love. “If in my youth I had found a husband whom I could have loved,” she wrote in her memoirs, “I should have remained faithful to him all my life. It is my misfortune that my heart cannot rest content even for an hour without love.”

Note: No, Catherine the Great and her horse did not engage in...erm, how you say...sexual congress. That's just a myth invented by people who like to mock powerful women--the same people who accuse Hillary Clinton of being a lesbian or Britney Spears of being crazy. True, Catherine the Great liked to ride, and she loved cavalrymen (the younger the better). So there was no equine sex, although it must be said that the Empress did enjoy dressing like a man and riding a horse astride her thighs. 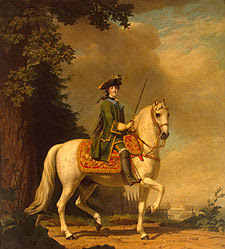 It is rather curious that, in her best-known portraits, Catherine is invariably mounted on a horse. I don't know enough about the backgrounds about these paintings, but I'm guessing she prefers this pose of power to the other alternatives. What books or sources did you consult to compile this piece?

Thanks for asking, Kenneth. You're the first person to ask me for my sources. You must be a writer! Here's the bibliography from a short biography I've written about Catherine:

The Memoirs of Catherine the Great. London: Hamish Hamilton, 1955. Translated from French.

Thanks for the bibliography. Your summery made me curious. I'll be checking out some of those on the list. (I'm a writer, but my editorial training prompted the question.)

AMAZING biography.....I've been searching all day for one that I can understand♥♥

Thank you! Catherine the Great continues to be a source of fascination for many people even in the 21st century.

If you'd like an alternative to randomly approaching girls and trying to find out the right thing to do...

If you would prefer to have women hit on YOU, instead of spending your nights prowling around in crowded bars and restaurants...

Then I urge you to view this short video to uncover a strong secret that has the potential to get you your personal harem of sexy women:

Professional trading signals delivered to your mobile phone every day.

Start following our signals NOW and gain up to 270% per day.

Why I Started Chasing Bad Girls